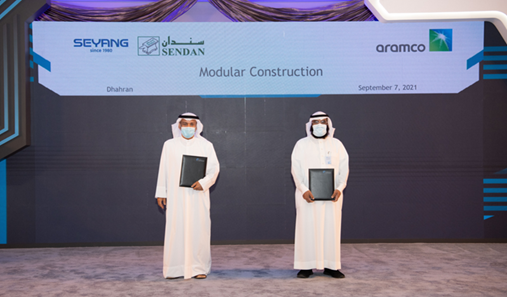 SEYANG Corporation, a modular process skid design and manufacturing company, and SENDAN International, a construction, maintenance, and manufacturing company, recently signed a Memorandum of Understanding (MoU) with Aramco at Aramco’s Namaat Industrial Investment Program (IIP) launch event in Dhahran on September 7. The joint venture between SEYANG Corp. & SENDAN Industrial has been focusing on “Made in KSA,” in line with iktva and IIP of Aramco, by developing its plan to establish a design and manufacturing facility for modular process skids. The integrated complex would house all major manufacturing processes under one roof. It is expected to be on 85,000 M2 of land secured in the Industrial Park of Jubail Industrial city, administered under the Royal Commission of Jubail & Yanbu. Initially the joint venture would target local demand, especially from oil & gas and petrochemical industries and subsequently expand its market to GCC, Asia, Africa, and South America. It is hoped that this collaboration between the joint ventures and Aramco will shorten the up-coming mega projects schedule while creating local jobs and contributing to the social & economic growth in the Kingdom of Saudi Arabia.

Our offices and branches throughout the region

Founded in 1994, SENDAN has rapidly grown from a modest contractor to a reputable General Contractor for Plant Construction and Maintenance.

It has expanded its portfolio to a broad range of businesses ranging from construction, maintenance…